Because this is Philip José Farmer's Official Website, over the years many people have come here looking for Phil's email address. Phil did have internet but did not use email very much. Some people also asked for his snail mail address for business reasons, and some asked for it so they could send fan mail. If you have a business interest we are happy to forward messages to the agent for the PJ Farmer Family Trust. While Phil did not actively participate in the upkeep of this web site, we did speak with him regularly and post any news he had for us, until he passed in February 2009.

So then, how and why is this Philip José Farmer's Official Web Page? Below is a brief history of the evolution of this web site:

When I, Michael Croteau, first got online in 1995 (after leaving AOL), I was thrilled to find so many web pages about science fiction authors done by their fans. Most of the authors I liked to read had very good pages about them online. One notable exception was Philip José Farmer. There were a few general pages about science fiction, like Alpha Ralpha Boulevard and UltimateSF with information about Farmer, but no pages dedicated exclusively to him.

In September 1995 I went to my first book signing (if you don't count Maurice Sendak when I was 10). Philip José Farmer was the Guest of Honor at RiverCon XX in Louisville, KY. I travelled up from Atlanta, GA and managed to get 22 hardcovers signed, two at a time, by continuing to go through the line until I was the only one left. The following September I decided to put up my own web page about Farmer and tried to contact him. I sent letters to a half a dozen publishers asking them to forward it to Phil. None of them did.

I put up the web page at the unlikely address of http://www.mindspring.com/~ledzep/ and called it The Unofficial Philip José Farmer Home Page. This was going to be a temporary name for the page until I could think of something better. It lasted for five years. In the beginning the page wasn't much more than a list of books and short stories with descriptions and scans of book covers. This is when I really began to collect Farmer's books, so that I could scan them and put them on the web page.

After finally realizing that none of Phil's publishers had forwarded him my letter, I tried mailing him a letter using an address that I got from another fan, but I never heard back from him. I then decided to try to call him. I was so nervous that once Phil got on the phone I actually said "I'm very bother to sorry you, I mean...". You get the idea. I told him about the web page but he had not received any of the letters I sent because they went to his old address. He gave me his current address and promised to get back to me.

In the letter I sent him, I included printouts of the web pages and asked him if he would consider letting me operate his official web site. He sent back my printouts with my many spelling mistakes corrected and said that we would have to see about making the site official. Also this was the first contact Phil had with me and he had no reason to trust me with his official site. Time went on and I continued to add scans to the web page. A big improvement to the page occurred when Farmer collector Craig Kimber told me about Galactic Central Vol 23, a fantastic bibliography of Farmer's works that I immediately ordered from Chris Drumm Books, for $4.50. Once I got my hands on this I started adding web pages about other categories of Farmer's work and pages about things written about Farmer. I also began to expand my collection in these areas. At this point every scan on the web page was still from a book, magazine or fanzine in my collection.

In September 1997 I headed to Peoria for the Mid-America Book and Paper Fair, where Farmer would be doing a book signing. I made arrangements for Craig Kimber and I to interview Phil for the web page. After the interview Phil surprised me by asking if I could sell some of his paintings on the web site. I said that I didn't know anything about selling his art (he has many of the original paintings used for his book covers) but I would be glad to try. I told him that I did know something about the value of his books if he wanted me to sell any of them for him. I did eventually sell two paintings for him, along with a lot of books. This eventually lead to us selling copies of his unpublished manuscripts here on the web page.

In 1998 I started working on Collecting Philip José Farmer, The Illustrated Guide, Volume 1. There were several books that I did not own (yet) but felt that I had to have in the book. I had other people scan their copies of these books so I could use them and I decided to add them to the web page as well. This was the first step in opening the page up and letting other people contribute.

The web page continued to grow slowly but surely over the next few years. Following the Living Legend Reception in Peoria, PJF collector (and ebay menace) Rick Beaulieu asked me if I had ever asked Phil about making the page official, and if I had ever thought about getting a real domain. I had not asked Phil about making the site official since 1997. Having visited Phil many times, sold many items for him online and writing a collectors guide about him, I was no longer a total stranger and this time Phil agreed. Rick then bought www.pjfarmer.com and found an ISP to host it and we changed over to the Official page on October 9th, 2001.

You can read about changes to the web page since then at the What's New Archive. 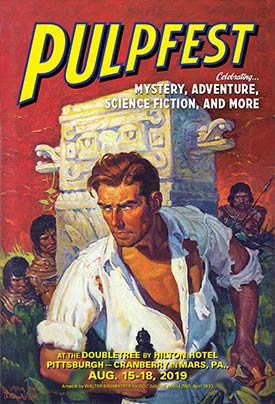