Considered by many to be one of the greatest concepts in all of science fiction. Everyone who has ever lived on Earth, from cavemen to 1984, is resurrected along the banks of a million mile long river. Food is provided three times a day through "grails" and if you die you wake up the next morning somewhere else along the river banks. Characters from any point in history meet, interact (and usually go to war) in these great books. 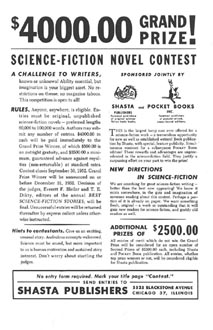 In 1952 Phil decided to quit his job to become a full time writer and entered a contest sponsered by Shatsa Publishers and Pocket Books. After working day and night on the story he managed to get the manuscript for "Owe for the Flesh" in the mail on the last day. At first it seemed he made the proper decision as he won the contest and the $4000 prize, a lot of money for a writer in those days. Shasta did not pay him however and claimed that Pocket Books wanted some revisions and cuts before they would publish the paperback version of the book. Phil finally hired an agent who discovered that Pocket Books had paid\d their share of the prize money to Shasta long ago. Shasta had used the money to promote another book which was a flop. Shasta eventually filed for bankruptcy and never paid the prize money.

Phil had to stop writing full time and go back to work. If you look at the books and short stories list you can see that his production greatly dropped from 1954 to 1957. In the mid 60's Frederick Pohl suggested that one book was too short for the riverworld idea and convinced Phil to write several novelets that he could publish in one of Pohl's magazines. 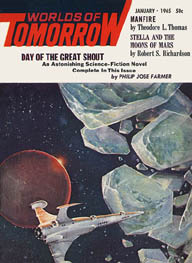 The Day of the Great Shout

The first Riverworld novelette. This is basically the first half of what would eventually become TO YOUR SCATTERED BODIES GO. 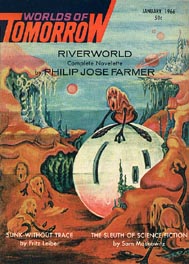 In this story Tom Mix (another of Farmer's heroes) is the main character. He is travelling with a mysterious individual who looks just like him. 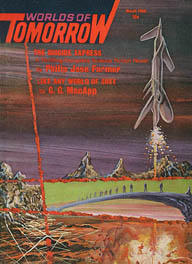 This is the second half of what would become TO YOUR SCATTERED BODIES GO. 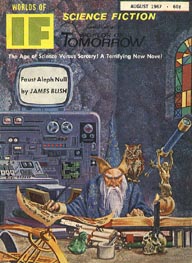 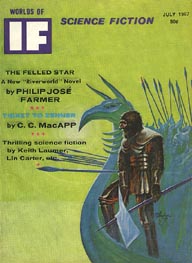 Parts 1 and 2 comprise chapters 1-14 of The FABULOUS RIVERBOAT which was published as a novel in 1971. We're not sure how much the text was altered. 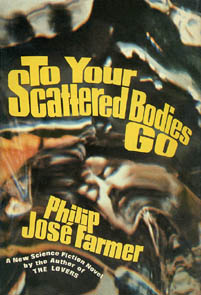 TO YOUR SCATTERED BODIES GO

Nineteen years after winning the Shasta contest, the first Riverworld novel is finally published. Anyone who reads science fiction is familiar with the premise; Everyone who has ever lived (up to 1984) is resurrected on the banks of a million mile long river. Their bodily needs are taken care of and if you are killed you wake up the next morning somewhere else on the river. This book looks at Sir Richard Francis Burton, famed translator of the 1001 Arabian Nights and discoverer of the source of the Nile. Burton meets many interesting and famous people and also hangs out with Peter Jarius Frigate (note the initials). 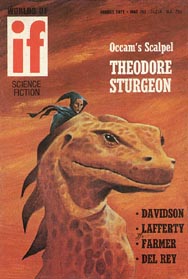 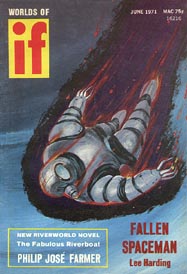 Parts 1 and 2 comprise the last half, chapters 15-28, of The FABULOUS RIVERBOAT which was published as a novel in 1971. 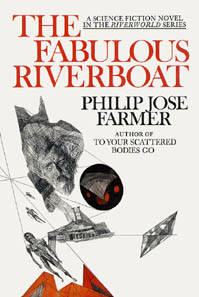 Book two of the Riverworld series. This time Samuel Clemens is the main character and since sailing is much easier than walking he decides to build a boat and use it to find the source of the river and whatever may be waiting there. The reader also learns more of the secrets of the Riverworld. 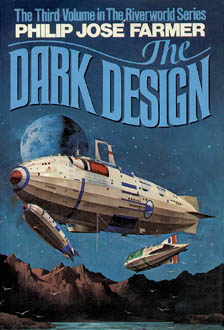 The long awaited book three of the Riverworld series. Sir Richard Francis Burton is back and still searching for the source of the great river and the answer to the eternal question, why are we here? In this book we trade in Sam Clemens' favorite form of travel for Philip José Farmer's, the dirigible. 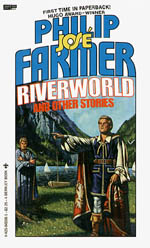 RIVERWORLD AND OTHER STORIES

This short story collection includes the novelette Riverworld which appeared above in Worlds of Tomorrow, January 1966. 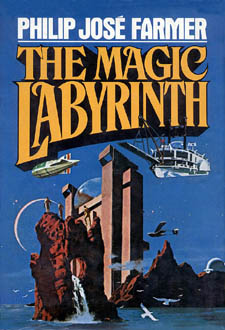 The fourth and supposedly concluding book of the Riverworld series. Richard Burton and his companions finally make it to the end of the river and gain access to the home of the mysterious "ethicals". 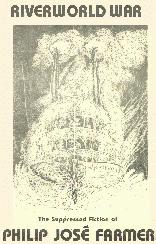 Includes the story, Riverworld War, which is a chapter that was cut from The Magic Labyrinth. 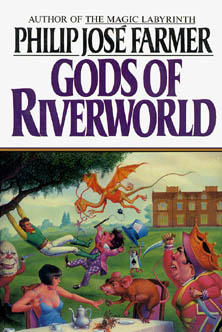 The journey is over and now our travelers have control of the resurrection process and the power of life and death over billions of people. But they are not alone. Once again Farmer stimulates the mind. 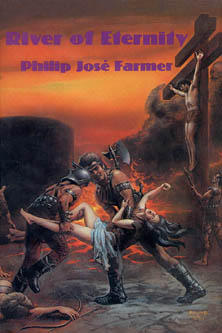 As described above, the original Riverworld novel "Owe for the Flesh" was lost. Farmer finally got around to recreating the story as best he could and published it as River of Eternity.

Includes Crossing the Dark River by PJF and eight stories by other authors. This is the first book where other writers get to play in Farmer's backyard, which is only fitting since a large portion of his work is based on characters created by others.

Up the Bright River by PJF is a continuation of Crossing the Dark River. This book also contains twelve stories by other writers and a another new story by Farmer titled Coda.

A movie for the Sci Fi Channel, starring Brad Johnson, Karen Holness, Emily Lloyd, Jeremy Birchall, Kevin Smith, Nikita Kearsley and Brian Moore, based on the book series by Philip José Farmer. In this unique and daring fantasy adventure we travel to RIVERWORLD, a mysterious and treacherous land where every human who died between the years 99,000 BC and 2,200 AD has been resurrected on the banks of a colossal river. It is on the riverbank where we follow a team who bond together as they try to unravel how and why they've arrived here, while coming face-to-face with some of the most dangerous people in history.

The Riverworld pilot came out on DVD on November 16th, 2004. As we reported in October 2004, Alliance Atlantis, in conjunction with The SciFi Channel, renewed their option on Riverworld. This means that there is hope for the series after all, but we still don't know if they will continue from the Pilot or start over from scratch. The latest update we have received is that not everyone involved is happy with the new concept so things are going to be delayed. This means that the show will not make it into this season's production schedule so we are now looking at 2006 as the earliest possible air date. 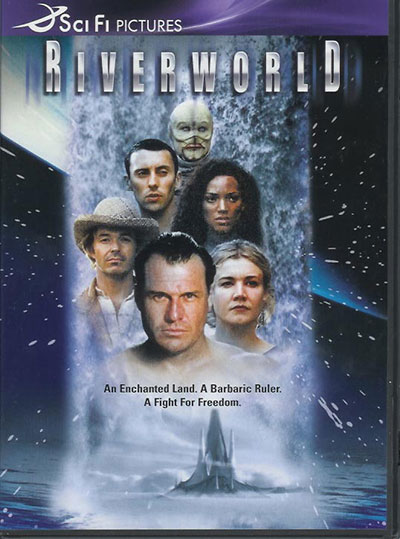 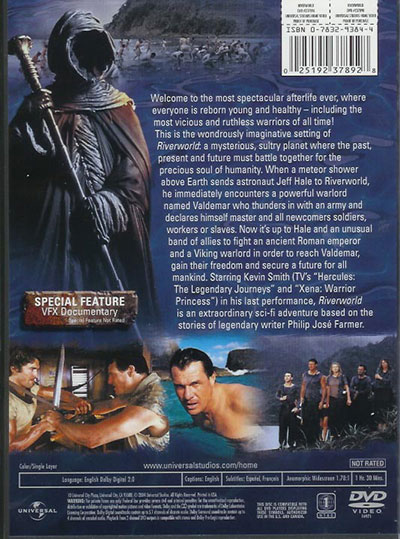 Back of Riverworld DVD case 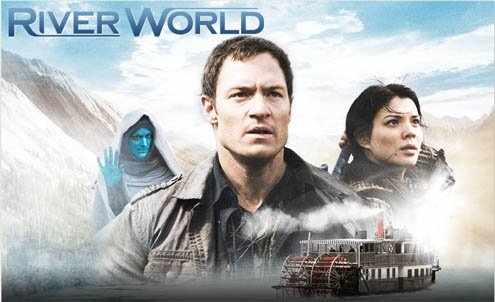 Ok, having lived through the first Riverworld TV adaptation, we didn't have very high expectations. We knew they were going to do things like have staggered resurrections. So the protagonist wakes up on a new world and discovers people who have been there for years and who know how everything works. Thus we lose one of the most fun parts of TO YOUR SCATTERED BODIES GO, the "Day of the Great Shout" where everyone who ever lived on earth suddenly wakes up naked, hairless, in a 25 year old version of their body, lying on a crowded riverbank. This of course causes many of them to completely freak out as this is not the afterlife they expected. For some reason both versions had horses even though there are no animals in the books other than fish and insects. Both versions had to make the protagonist a modern American instead of an interesting historical character like Sir Richard Francis Burton. Both versions did have Mark Twain, because most Americans have heard of him.

One thing the second version did do, was have Burton as a character, yea! But as a villian instead of the protagonist, boo! This was an interesting twist. During the novels Burton, and others, are being fed information and given help by a race of "Ethicals," to reach the tower at the end of the River. But we never really understand the motivation of their mysterious helpers. The miniseries turns this around and shows us characters being helped by "Caretakers" to stop Burton. We still don't know why rival Caretakers are trying to help or hinder Burton's quest, but now our focus is on the opposite side of the battle. Then the payoff at the end is that we finally see things from Burton's point of view. Now we're supposed to be conflicted and not know if Burton was right in his quest or not. Was our modern American hero wrong all along in trying to stop Burton (his only real movitation being that Burton stole his girl, who of course has been on the River for years before he woke up)?

As noted above, this was an interesting approach. It might have worked nicely except for one thing; in making Burton "look" like the villian, they made him a villian. It isn't a case of just misunderstanding his motivation when he's constantly giving orders like, "Burn her at the stake" and "Kill them all." No, this Burton is an asshole that no one would route for at all if he wasn't being played by Peter Wingfield (by the way, we love Peter Wingfield, but they might as well have cast Mos Def if they weren't even going to try and find someone who looked anything at all like Burton).

Having said all that, we're still hoping for a TV series. Maybe with some practice the writers will figure out how to best utilize this amazing world Farmer created.